On the ship, which set course for Earth and is just a few hours away from his destination, on Sick Bay everything was in utter confusion!
Each crew member seems to wait apparently nervous for the event, which will occur there within the next few minutes. You can tell that the whole crew is jittery and strained, from Captain to the youngest Ensign.

Actually this unsteadiness of a starship crew wouldn't be anything particular in this situation, because a very pregnant woman lies on a bed at the Sick Bay. She will give birth to her child within the next few minutes. Everybody waits for the delivery. This child will be someone very special, and everybody aboard of the ship knows that. From minute to minute the nervousness raises in the faces of the crew members.

All of this would be absolutely normal, if ... yes, if this ship wouldn't be a Vulcan shuttle and if this crew wouldn't consist of Vulcans! What is the reason why a birth causes such outbursts of emotions? Well... the delivering mother is a Human from Earth! The father of the newborn is a Vulcan!

Every crew member knows from history books and computer files that such an event brought an important and today famous personality to their people many decades ago.

The Captain who has been at the Sick Bay for one hour presses visibly touched the communicator button and the yell of the just born baby echoed through the corridors of the ship.

Finally the nervousness of the crew comes to an end and everybody takes a deep breath with relief. The doctor has to do several hours of surgery precision work, because the pointed-eared newborn has to become a humanoid looking creature up to the landing on Earth..... and that requires several changes by means of plastic surgery, especially at the ears. After three hours the tiny Vulcan turns into a tiny Human. He is named Willi Wiegand. 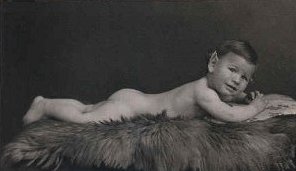 The Vulcan shuttle begins the landing approach to Earth. On the continent Europe it is night and the Captain decides with approval of his officers to land there, to leave the humanoid mother and her newborn unnoticed in the veil of the night.
The accurate coordinates:
Europe - Middle Europe - Germany - Hesse - Frankfurt / Main.

This city is going to become the new home for both. Willi will go to a kindergarten, he will finish the secondary school when he is 14 year old, will serve an apprenticeship as typesetter, will work at this job for 10 years, will give up this job after that and will earn his money as employee at a library until now. For 42 years he manages to hide his origin. When he was 19 years old he saw a documentation about Spocks ancestors disuised as a Science Fiction show on TV which reminded him of his origin.
Week after week he watched this documentation called Star Trek.
After three years suddenly they stopped the broadcast of these informative transmissions, but some fans were told to meet and to become more and more every year and to call themselves Trekkies.
In the year 1995 Willi joined these fans and one year later on March he presented himself to the public - camouflaged as dressed up fan - showing his true origin... Vulcan! The media scene became aware of him, newspapers reported on him and he even was invited to several TV shows.

He even got more and more famous within the so-called fandom and therefore he even was invited to conventions as Spock-double to tell the fans about himself on panels.
Though he grew up in Frankfurt Willi fortunately had adopted the Hessian dialect, which amused the fans who always had the dubbing voice of Spock (Herbert Weicker) in their ears. That's why they never became suspicious and just thought:
There is a quite good double on the stage.